Food Files: The Cheesecake That Wasn’t

One of my closest buddies at the office was someone who’d transferred to my team from a different team. In his former unit, every person’s birthday was marked by a cheesecake– and in a large team such as that one, that meant quite a considerable amount of cheesecakes per year. It was no surprise that by the time this person and I became friends, the poor gentleman was all cheesecaked out.

I found myself in a bit of a dilemma: All the rest of my teammates were hardcore cheesecake enthusiasts, and I wanted to bring in a dish that would please both them and my cheesecake-weary friend. This meant creating something with the creamy zing of a cheesecake, but without the thick, cloying texture and heavy richness that settled like a lead weight in one’s stomach.

The solution: Lemon juice, cream, and milk. When mixed together, the lemon juice curdled the dairy components into a mass that was ever-so-silky smooth and somewhat firm, but delectably light and jiggly. Try this recipe on your non-cheesecake eating friends and see if they approve!

-300 ml thickened cream or whipping cream
-2 cans of condensed milk (400g each)
-2 lemons, well washed to remove any dirt, wax, and/or pesticides from the rind
-1 pack of your favorite plain cookies or biscuits (I used shredded wheatmeal/digestive biscuits, but feel free to use whatever takes your fancy. You may want to try shortbread cookies or ginger snaps, for example.)

Optional: 1 tablespoon unflavored gelatin powder (to keep the slice from melting into a puddle during a warm day)

Use the cookies to cover the bottom of a 9 x 13-inch baking pan or tray. Break some of the cookies into little pieces to fill in any large gaps. The result doesn’t have to be perfect, as long as you have a somewhat even layer of cookies for the “cheesecake” to sit on. (This method is identical to forming the base for Cookies ‘n Cream Dream Dessert.) 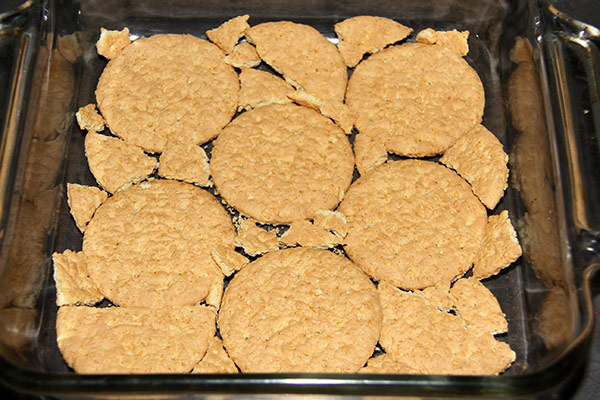 Whip the cream until it forms soft peaks. 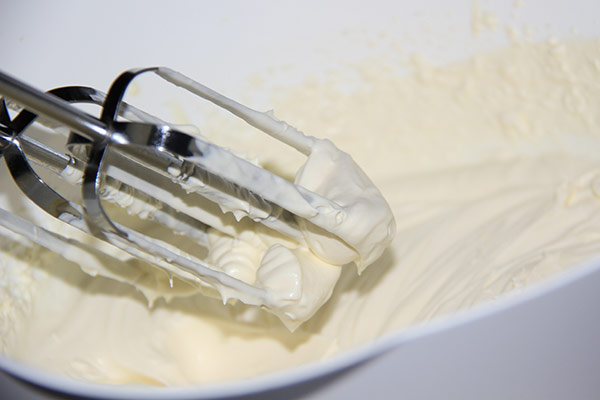 Add both cans of condensed milk, and beat the ingredients together with a whisk or electric mixer. 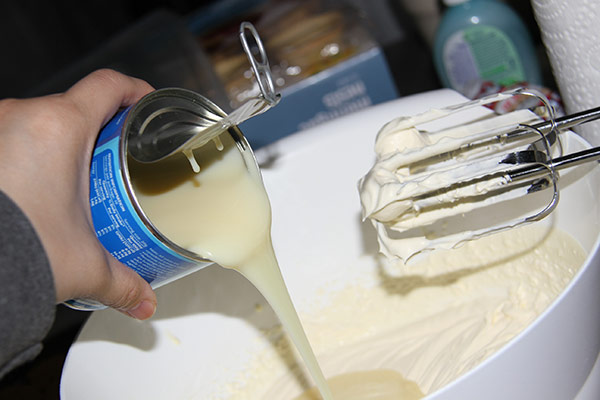 Grate the lemon zest into the milk/cream mixture. While you’re at it, enjoy the refreshing lemon aroma… it’s way better in its natural form than in artificially lemon-scented household products! 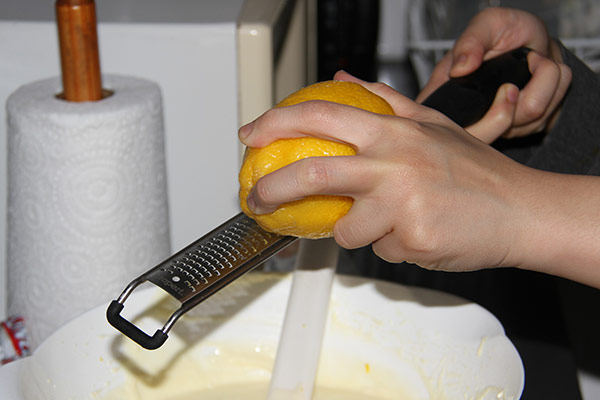 Slice the lemons in half, place them on a microwave-safe plate, and zap them in the microwave for 40 seconds. This will enable you to get the maximum amount of juice from them.

Juice the lemons directly into the milk/cream mixture, or if you’re adding gelatin, juice them into a measuring jug or similar container. You’ll notice that I’m using one of the beaters from the electric mixer to juice my lemons– it extracts more juice and also scrapes out a lot of luscious lemon pulp. If you use a beater for extracting the juice, place a sieve under the lemon half, to catch the seeds. 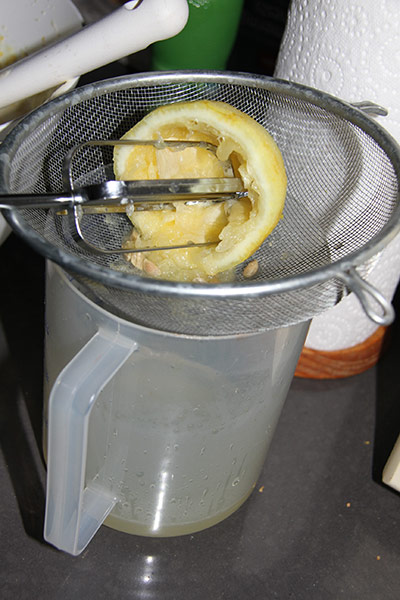 If you’re adding gelatin powder, dissolve it in the hot lemon juice by stirring it vigorously. You may need to reheat the lemon juice in 15-second bursts, stirring after each burst, to get all the gelatin dissolved. Pour the lemon/gelatin mixture into the milk/cream mixture. 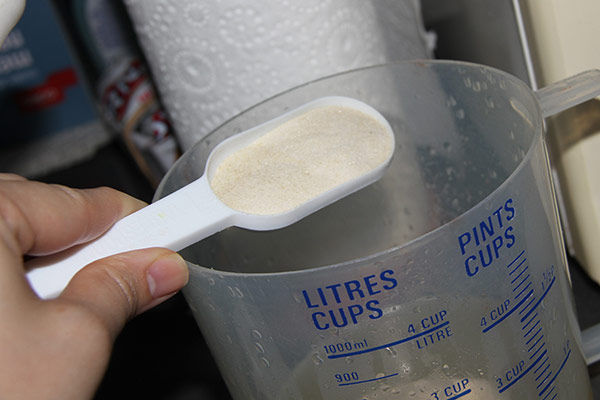 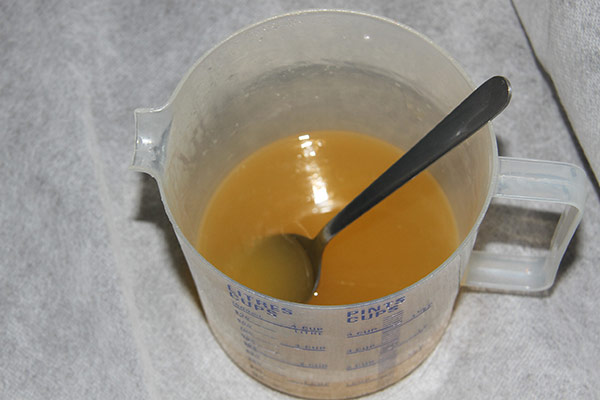 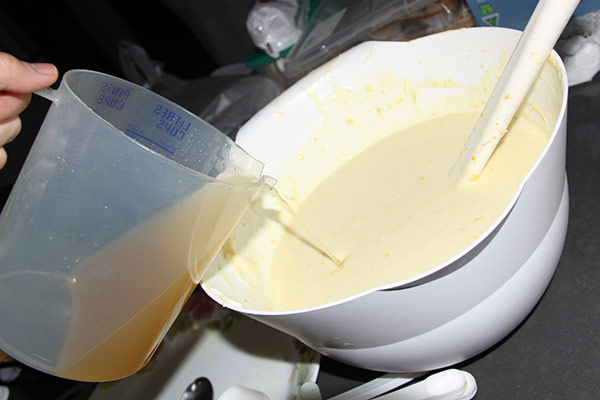 Beat everything together, ensuring all the ingredients are totally incorporated with each other, and spread the mixture over your biscuit base. You’ll have to work quickly, because the lemon juice will immediately start working its magic and thickening the dairy components. Go go go go! 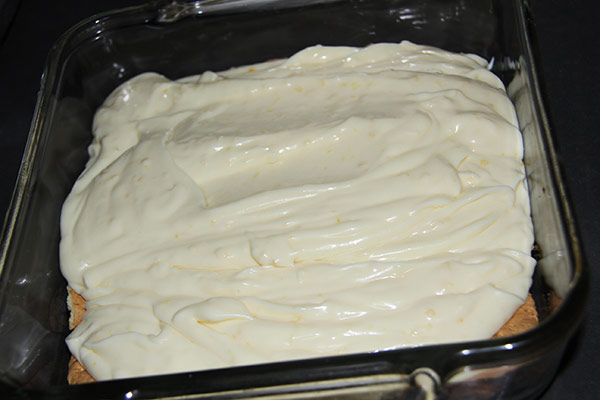 Refrigerate the dessert for at least 3 hours, and either serve it as is, or dress it up with whatever toppings you prefer. You don’t need to go all fancy– as you can see here, a sprinkling of flaked coconut and a scoop of canned fruit cocktail make it look all festive and inviting. Try a scattering of your favorite fresh or canned fruit, perhaps with lashings of whipped cream or white chocolate. 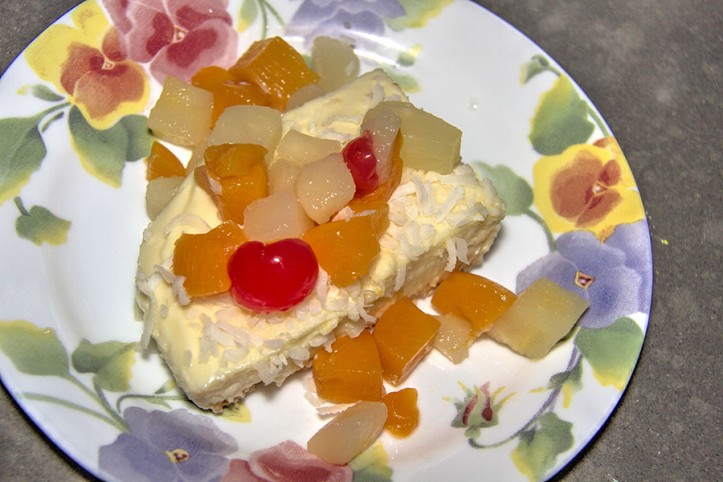 Word on the Street